A morning cup of piping hot coffee is a staple for many to begin their day and many claim it to be addicted to it, taking in more than what is normally suggested. But  how much caffeine is really too much?

The dispute is relevant as recently a California resident had been charged with driving under the influence over a year ago. The arresting officers believed that the reason for his erratic driving were a combination of substances. They even described him of being agitated with dilated pupils and had failed the sobriety test. However, toxicology results found no traces of drugs, alcohol, instead found just one stimulant : caffeine. Though all charges have been dropped, the effect of caffeine is still  .

Coffee aficionados can look forward to another cup in the afternoon instead of wanting the morning swig of coffee. The reason behind it, say experts, is that the level of the  hormone cortisol peaks 20-30 minutes after waking up in the morning and mixing caffeine at that time may reduce the effectiveness of the stimulant with time. Hence, it is better to take that cup for your afternoon refreshment when cortisol levels are lower.

As always, light wins over dark. While buying coffee beans, look for a light roast than dark as lower the exposure to heat, lesser the loss of caffeine. When cutting down on caffeine intake, go for cold coffee brews or switch to a nice cup of tea. For everything else, there’s always decaf.

Science says that caffeine improves mental concentration and focus and acts as a moderate stimulant. It can reach the brain very quickly and make the mind alert and sharp.

For athletes, drinking caffeine an hour before a workout can help to improve sports performance and endurance. It acts on the metabolism by burning more fat thereby providing energy.

How caffeine affects our system?

The effects of caffeine are seen within 15 minutes once taken, depending on the intake. A low amount of caffeine ( 20 to 200 mg) can present with effects like happiness, alertness etc. On the contrary, large amounts of caffeine can lead to negative symptoms like anxiety, panic attacks, mood swings to name a few.

Can one get addicted to caffeine? 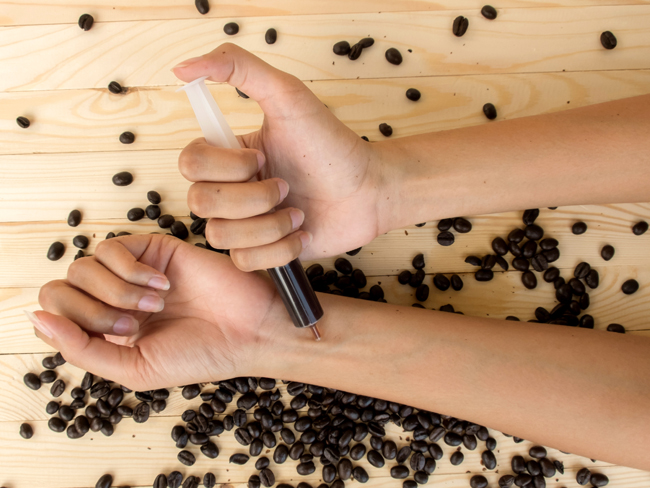 The answer is yes and no. Prolonged use of caffeine can lead to dependence and in some cases, it may lead to addiction and  intoxication. Those who are caffeine dependent can exhibit withdrawal symptoms 12 – 14 hours after limiting its intake. Symptoms can range from anxiety, jitters, fatigue to depression and severe impairment in cognitive function. However, it is necessary to know that symptoms can vary from person to person depending on their tolerance levels.

In the case of caffeine, it is indeed possible that excessive consumption can lead to intoxication, but as is the case with every substance, moderation is the key.

Addicted to coffee or alcohol? Speak to our in house counselor on Visitapp.